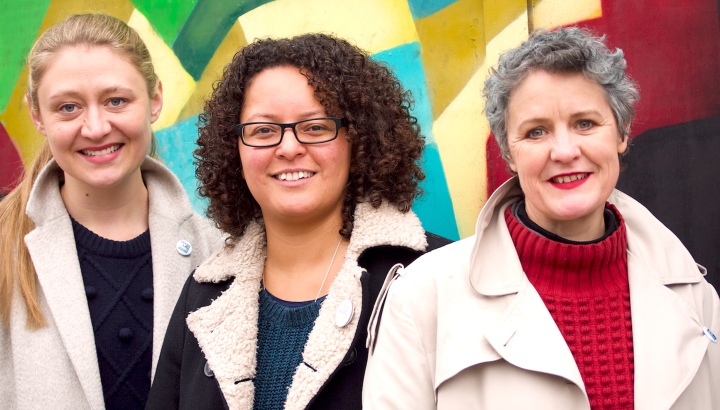 In the centenary year of some UK women getting the vote, voters in Ladywell, Lewisham Central and Brockley wards have the chance to make history by giving one of their three votes on 3 May to the Women’s Equality Party, putting women’s and girls’ needs front and centre of council decisions.

The Women’s Equality Party is a collaborative political force uniting people of all genders, ages, backgrounds and ethnicities in the shared determination to see women and men enjoy the same rights and opportunities so that all can flourish. Only three years old, the party secured 5.2% of the votes cast in 2016’s London mayoral race and 7% in the Brockley by-election.

The three Lewisham candidates standing for election on 3 May are calling for:

“With government cuts affecting women and girls disproportionately, it’s never been more important to bring their voices and their requirements into the centre of local politics and put aside party-political agendas. The Women’s Equality Party does politics differently, collaboratively and WE work with other parties to make women’s equality a reality” says Rebecca Manson Jones, Director of award-winning theatre company Just Jones &, member of the WEP Health Policy group, standing for election in Ladywell.

“Lewisham is a young and culturally diverse borough,” adds Mandu founder of groundbreaking charitable NGO The Cup Effect. “But I don’t see that adequately represented in the Council Chamber. One of the things that sets WEP apart is our understanding that creating equality is about respecting and celebrating the ways we differ from one another as well as the things we have in common. I’m determined to break down the barriers that stop women, and women of colour in particular, from taking part in democracy.”

“It’s time to make sure that policies in Lewisham are truly benefitting everyone, and the Women’s Equality Party will bring fresh, bold ideas to the council chambers to make sure this happens,” concludes Kate Vang, candidate for Brockley, whose background is in policy and business.

Rebecca Manson Jones – candidate for Ladywell. Rebecca has lived in the Ladywell ward since 2010 with her partner of 25 years. They expect to grow old in Lewisham. Rebecca runs a small arts charity Just Jones & and creative consultancy and has a background in theatre direction, production and cultural policy. She has served on the senior leadership teams of National Portfolio producing theatres in London and Exeter. Her achievements in broadening participation and diversity have been cited as a model of good practice by Arts Council England. She is a member of What Next, a national movement committed to challenging austerity in arts, culture and public services and co-chairs the What Next Lewisham chapter. She has volunteered with the Brockley Design Project, Brockley Max, the Hilly Fields Fayre, the accessibility advisory group at The Albany and was shortlisted to write the London Borough of Culture bid. She is a Governor at Sydenham School. She was on the Women’s Equality Party list in the 2016 GLA elections. Rebecca was part of the deputation invited by Lewisham Council to give evidence last year on barriers to women getting into politics. #RMJ4Equality,

Mandu Reid – candidate for Lewisham Central. Mandu is founder of a small charitable NGO and social enterprise The Cup Effect (www.TheCupEffect.org) that raises awareness about menstrual cups and eliminating the taboos and stigma that shroud menstruation in the UK and internationally. With almost no resources, she has succeeded influencing the Kenyan government to acknowledge the potential of menstrual cups to address some the issues faced by women and girls living in poverty. She has been invited to speak about her work on BBC Radio 4 Woman’s Hour, the Ministry of Justice, the RSA, the Women of the World Festival, The Commonwealth Institute, a TEDx event at BAFTA headquarters in Piccadilly, The LSE, and the Fourth Wave Feminist Festival among others. She has worked for the Mayor of London for 10 years, where she has held a variety of roles focused on strategy, policy, and operations including playing a key role in the preparations and delivery of the London 2012 Olympic and Paralympic Games. She has lived in Lewisham for 9 years and was previously a school governor at a Lewisham secondary school (Crofton School). #Mandu4Equality,

Kate Vang – candidate for Brockley. Kate has been speaking out for equality her whole life, especially for feminist and sustainable economics. She believes a fair local government works better for everyone. After a career in business, Kate now works at an international charity where she focuses on using data as a tool for positive social change. She is an active charity trustee and volunteer, sings in a choir, and enjoys growing veg in her Catford allotment. As a proud Lewisham local, she will listen to residents and speak up on their behalf to tackle challenges such as housing, education and social care. She is a founder-member of the Women’s Equality Party. #Kate4Equality

The Women’s Equality Party was co-founded by author and journalist Catherine Mayer and broadcaster and author Sandi Toksvig in March 2015. WE are pushing for equal representation in politics, business, industry and throughout working life. WE expect equal pay for equal work and will look for ways to tackle the existing imbalances that leave many women, such as those who are unpaid caregivers or in low paid jobs, especially vulnerable. WE are pressing for equal parenting and caregiving enabling everyone to share opportunity and responsibility in the workplace and at home. WE urge an education system that creates opportunities for all children and an understanding of why this matters. WE aim to address the ways in which the portrayal of women in the media impedes progress towards equality. WE seek an end to violence against women and recognise physical and sexual violence as a public health problem. WE understand that there are many forms of inequality. Our party and policies are informed by the views and experiences of those doubly or trebly disadvantaged, by their gender and by other factors such as ethnicity, age or disability. WE do not try to present ourselves as a party with an answer on every issue and a full palette of policies and will never take a party line on issues outside our remit: to bring about equality for women. WE are a focused mainstream party and WE will not stop until all other mainstream parties embrace and adopt our agenda of equality – and take action to achieve it.

Because women’s equality is better for everyone

My Tweets
Join 3,744 other subscribers

Things I think about

Public interest news for Greenwich and SE London, funded by you